Thorpe Park’s classic ‘haunted’ Dark Ride’s story was loosely based on some of the dark parts of Britain’s history.

Now: Detonator now stands where this ride building used to be.

Phantom Fantasia – from the 1986 park map “A chilling sensation designed with everyone in mind.”

Wicked Witches Haunt – from the 2000 Thorpe Park Website “Wicked Witches Haunt is a dark ride spooked with disappearing ghostly images and giant hairy tarantulas. The ‘haunted’ ride takes guests through a pitch black, eerie cave which will send shivers up your spine.”

The entrance to the ride building was decorated to look like a Tudor style building with white walls and black wooden beams. After walking through dimly lit queue lines you entered the themed loading station. One memorable part of the station theming was a chandelier made out of skeleton parts that hang overhead. To get into the ride cars you then had to step onto a circular revolving loading platform/area. This was similar in style to the one used on Thunder River/ Rumba Rapids.
The ride cars themselves were a black ‘Clam Shell’ design, which were capable of turning 360o, with a single lap bar that came down as you left the station area. These cars were different to those on most other rides as they were part of a continuous chain of cars rather than being part of separate trains.

Throughout the ride building an eerie atmosphere track played, this featured the sounds of bells being tolled, chains rattling and creepy wailing. This together with the darkness of some parts of the queue line and ride was sometimes too scary for some of the younger children who wanted to ride. However one the ride started it mostly featured slightly comical scenes showing the lighter side of some of Britain’s darkest moments in history.

Some of the scenes included in the ride were:


When the ride had finished you exited through a ‘spooky’ gift shop that sold all kinds of scary/horror themed toys and gifts.

In 1994 the ride was re-themed to become Wicked Witches Haunt. As part of this re-theme part of the entrance building was partly re-decorated and the entrance to the ride itself was moved around the corner from the original entrance, which was now a fire exit. Above this new entrance there was a large cackling animatronic Witch that would put some children off the ride before they had even entered the building.

Inside all the scenes had been painted in bright coloured UV paint to glow under the new UV lighting.

Some new scenes had also been added. They included:

Unfortunately on Friday 21st July 2000 there was a major fire at the park which destroyed the ride buildings for both Magic Mill/Mr Rabbit’s Tropical Travels and Phantom Fantasia/Wicked Witches Haunt.  Whilst Mr Rabbit’s Tropical Travels was able to re-open afterwards just with the indoor section removed, Wicked Witches Haunt was sadly no more. More information about the fire can be found on the Thorpe Park Fire page.

< Back to Past Rides Section 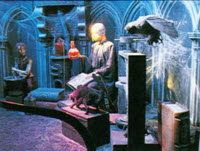 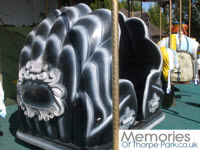 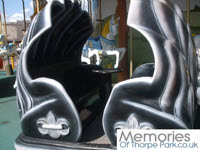 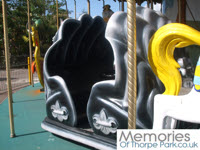 The Phantom Fantasia building, taken in 1993 supplied by Philip Hutchinson

Some of the ride theming, taken in 1993 supplied by Philip Hutchinson (October 1993)

Some of the ride theming, taken in 1993 supplied by Philip Hutchinson (October 1993)

Taken from the 1991 park map, supplied by Alec Dunn.

Taken from the 1993 park map, supplied by Alec Dunn.

Taken from the 1986 park map, supplied by trainsandstuff. 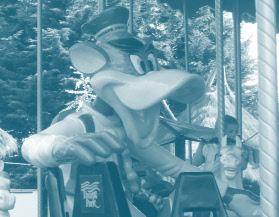 Content & Design of this site ©2010 - 2011  Memories of Thorpe Park. Thorpe Park is owned by the Merlin Entertainment Group.